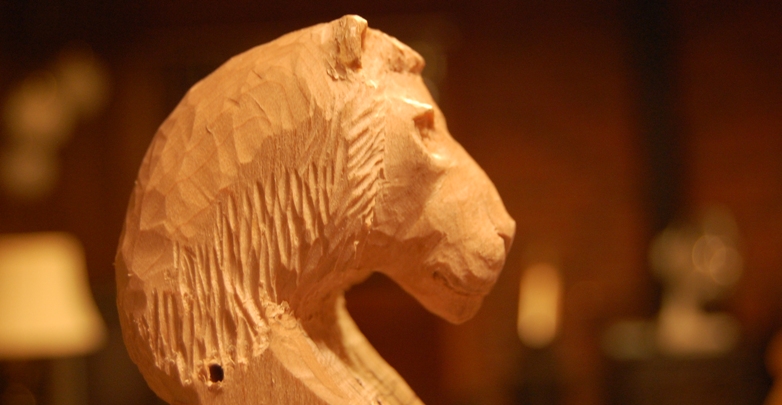 Not your “typical” Lion-head viola

So many of the “lion-head” instruments of the past have been either so highly stylized that they were unrecognizable, or so poorly carved as to achieve the same result, or, when done in a completely recognizable fashion, were representative of a snarling, dangerous beast which I find difficult to associate with a viola. I wanted the dignity and power of the lion– the majesty, to coin a cliché, and not the predatory beast.

I wasn’t even sure I could carve such a head, so, rather than risk a perfectly good neck-billet on a gamble against my questionable artistic ability, I decided to plan a grafted scroll. I have done this in the past, but this is the first time it was planned. Usually, a scroll graft is a repair, or a major alteration. In some (relatively rare) instances, a maker will perform a scroll graft in the new-making process, so that the new instrument will seem to be old. (No deception involved, it is just that virtually all instruments made before 1850 now have a scroll-graft, as a result of a shift in musical demands, and changing construction styles. Most of the “baroque” instruments were re-worked in this way, so that very few have the original neck.) The scroll-grafts I have done were repairs, up until now.

Knowing that there was a very good chance that my lion-head might not turn out well, I chose a very hard, even-grained maple block for the head, and only enough of the pegbox area to permit a graft. When/if the head turns out acceptably, I have a viola neck billet prepared to graft into the hard maple head, and after that it can be treated as any other scroll/neck for a viola.

This is how the Lion-head looks for the moment. The mane will have to fair into the cheeks of the pegbox–(which haven’t been sawn out, yet, as full-width is easier to hold in the vise.) That will have to happen soon, to finalize the shape of the head and mane.

The proposed viola is 16.5″ on the body, with a one-piece big-leaf maple back, and Sitka spruce top. The neck is big-leaf maple, except for the hard-rock maple head. (BTW, that hard-rock maple really earns its name– it was really hard to carve). As the viola is one of my own design, it is labelled an “Oliver” viola (my middle name, and that of my Dad and Grand-dad.) I use that name for all the instruments I design myself. Any design I copy from someone else’s work, I label as “Modelled after…”

The other violas I have made to this design (same body as #11 Oliver Viola– see the chronology) have had very good tone…I seriously doubt that the lion-head will affect the tone significantly for better or worse. But some people like a traditional scroll and will not like the lion. Others may find the lion attractive. We’ll see how folks respond. So far, I like it.